skip to main | skip to sidebar

A different kind of culture shock.
Belize is just a few hours south of here. It is a small country in an area initially dismissed by the Spanish for lack of resources, and became for a while a haven for English pirates. It was British Honduras before independence, 1964 and now is the only English speaking country in Latin America. But it feels most unfamiliar.

Having crossed over from Canada to the US and then the US into Mexico many times over our years, we became familiar with elements of culture shock at the borders.
I contend that many visitor’s first impression of Mexico by crossing the northern border with the US miss-represents the country we came to know and love.
Coming in from California, Arizona or Texas into Mexico, you do notice quite a difference. However, the border towns and cities are our least favorite areas of Mexico. They are jumbles of population that are there to work in the cheap labour factories of US corporations. The people there are mostly immigrants, displaced from their home communities and families, and economically forced to live in the war-zone of drug trafficking pipeline to the US. The rest of Mexico is mostly stable, organized, and especially friendly and welcoming. 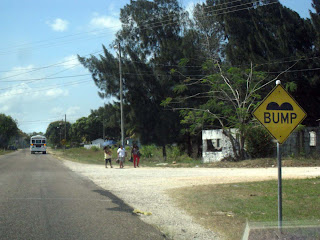 Crossing into Belize was a stark contrast to what we have become accustomed to here in the Yucatan. It felt like stepping into a real third world. We didn’t tour the whole country, but did cover several hundred miles through the interior. These may be offhand impressions, but we saw a lot of basic survival poverty. Most of houses along the road and in the towns were small and run-down. What traffic there was on the narrow hiways was a mix of mostly old jalopies, trucks and buses. Being used to “topes” it was interesting to see signs that said “Bump”

Our observation was that Belize has a wide racial and cultural mix. My research tells me that like Mexico, the majority of the population is Mestizo (mixture of Spanish and Maya), much of the population are from african descendants of the slave owners and slaves. There are large populations of orientals and many Mennonites, as well.
Unique to Belize is the Kriol language and culture. Kriol language originated with the slaves and is based on English with strong African influences, similar to what we heard in Barbados years ago. A majority of Belize speaks Kriol and you have to be patient to understand even a little of it. The local radio stations play a lot of regge. 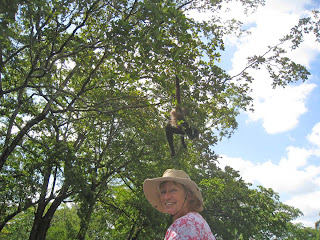 We based ourselves in the small city Orange Walk for three days, and took in some sites around the area.  Our hotel sat on the river bank where we caught a boat cruise two hours up river to a magnificent Mayan heritage site,  Lamanai.
Along the way our boat captain/guide paused to point out many animals and birds. At one spot along the river bank, Susan “touched a monkey” as this graceful spider monkey took a piece of cookie out of her hand. 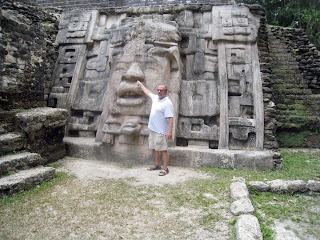 Our guide reported that Lamanai has been populated since 16th century BC. Its prominent time was in the “pre-classical” period of the ancient Mayans from the 4th century BC to the 1st Century CE. Located on a large river, it survived through the arrival of the Spanish who were ejected, and with smaller indigenous populations nearby until the present time. 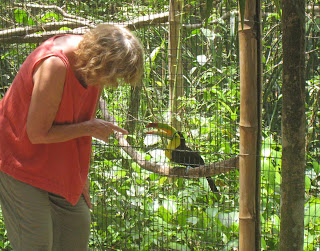 Another day we drove on to see the Belize Zoo. Very nice! Filled with native animals in carefully planned natural environments. Hard to beat the friendly Keel Billed Toucans. Also the Tapir, Belize’s national animal. We also saw several monkeys, other birds, including a huge stork, as well as the ocelot and the magnificent jaguar. 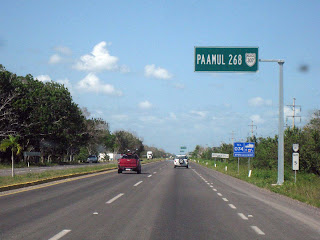 Returning to Mexico was a pleasant relief, back to the familiar bustling vibrant country. Roads were good and wide with clean, painted houses and shops along the way. Our 3 hour drive north from Chetumal brought us back to our winter home, a welcome sight.

I've just spent a few hours reading through your whole blog. I really enjoy your style of writing and hope to see more entries. My favourite are the construction entries, but I hope, for your sake that those are finished! :) it was so interesting to see the palapa construction. Thanks for taking me away from the Nova Scotian winter for a while.

Glen and Susan -
We have been winter camping in Mexico since 2001. We have been all over this country and have chosen to build a base on the Caribbean coast. Palapa Life represents a hybrid of Mayan, Mexican, and gringo styles and values. We are currently spending our summers in southern Ontario at beautiful Guelph Lake. (Not far from kids and grandkids.) We travel with our 12 year old Shitzhu, Pippin, reminding us always to stop and sniff the flowers.